To bunkai or not to bunkai, that is the question...

Been a while since I posted my thoughts here... life ebbs and flows with duties and distractions but some things stick to one's mind like flies to flypaper. Among these is the ongoing discussion on various forums regarding bunkai and its purpose, its usefulness and how some arts adhere to it while others forgo it entirely. Interesting topic indeed...


So, what is bunkai??
From Wikipedia:  Bunkai (分解), literally meaning "analysis" or "disassembly", is a term used in Japanese martial arts referring to the application of fighting techniques extracted from the moves of a "form" (kata).


Some kata have another layer of application that is taught using an Oyo Bunkai, an "application of the kata in ways other than the standard bunkai." Different practitioners will learn or discover alternative applications, but the bunkai, like the kata, varies based on the style and the teacher.


So bunkai could be interpreted as the study of how any move, or series of moves, within a kata could be used in a fight. Whether any of the moves extrapolated from the study of the form are to follow a specific order, direction, speed, or be guided by situational awareness of the interaction between the attacker and defender is not clearly defined historically, though. References to oyo bunkai as being non-standardized versions of "standard" bunkai should not distract us from the fact that almost all bunkai, even commonly accepted techniques, was not codified in any way or sanctioned by anyone other than individual organizations or ryu in an effort to provide some understanding of principles within kata and provide a template useful in analysis and interpretation for students to follow in their study of kata. There are several things I take into account when extrapolating bunkai from kata, which I mentioned in my friend Dan Djurdjevic's Traditional Fighting Arts Forum :

1- What body weapons are being used, do they follow their natural motion and strike target areas appropriate to their makeup (right weapon against right target)?
2- Are the techniques efficient, do they provide maximum return for energy being expended?
3- Are they simple enough to be retained with a minimum of training time? Complicated maneuvers tend to go south when involved in high stress combat, so techniques or sequences should follow the KISS principle.
4- Do they offer varied levels of lethality, can they be used to maim/kill and/or subdue?
5- Can they be used against a stronger/faster/younger attacker effectively?
6- Does the technique offer predictable, repeatable results?

These guidelines help streamline the process of sifting good, sensible techniques from questionable or outright dangerous applications that would not work outside the dojo (which is where it's at, if you get my drift). Not 100% fool proof, but if one takes the time to critically study a series of moves in a kata, whether as a series of paint-by-the-numbers steps or as principles of application within moves in no specific order, you can usually experiment and discover if it works, when it works, how it works and if you are lucky why it does.


Is bunkai really necessary?
The debate on the need for bunkai is one that flares up regularly in martial arts circles. Some folks on the MMA camp regard traditional forms training and bunkai as obsolete and out of touch with the realities of self defense... others believe that karate cannot be understood or applied in a civilian defense context without it.  Even within karate there are schools that have extensive bunkai collections while others have little to none, relying instead on codified self defense technique scenarios, kumite and one/three-step sparring to learn basic distancing, positioning, footwork, stances and timing in techniques.  Let me point out some interesting articles and discussions going on the Web at this time:


No bunkai in Wado Ryu karate? A great discussion on Ian Abernathy's site that could be applied to any style of karate.


The Sine Wave motion is not ever present in TKD Sanko writes about the sine wave motion as used in ITF TKD and comments on Shotokan karate's use of bunkai and ITF TKD's lack of it.


Forms: their core purpose by Dan Djurdjevic as a response to Sanko's article above makes a great case for the true purpose and utility of forms regardless of style practiced.


The Why of Bunkai Charles Goodin wrote this extensive article about bunkai for CFA magazine in 2006.


As you can see, the question on whether bunkai is useful or not to karate practice depends on who you ask. If you explore bunkai as canned responses to unlikely attacks you will probably end up feeling someday that MMA training is more realistic and effective than some ancient technique series from a 100 year old kata... on the other hand, the traditional model of teaching martial arts, with or without bunkai, has been around for a long time and produced many fearsome fighters so it should not be discarded lightly either. 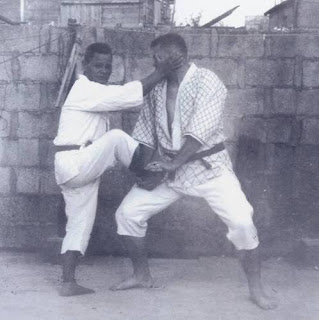 Isshin ryu karate was the first martial art I trained in with some bunkai studies. The origin of these technique interpretations from the various kata was never clear; my teacher did not really know and I would be willing to bet his instructor did not either. Yet he made it clear that as long as the applications worked against a serious attack he did not much care. In his line of work (corrections) he had no time for complicated techniques with dubious results, and his insight had a great influence on how I would approach bunkai studies in the future.  I'll admit that not all bunkai I've seen from various Isshin ryu sources makes sense; as with all things, personal interpretation plays a big role in how we understand things. Maybe whoever came up with some bunkai I find questionable knows something I don't... or maybe my own experiences do not resonate with what I was shown. This is the conundrum facing anyone trying to make sense of bunkai within kata.

An example of bunkai from Naihanchi Shodan

What method builds better defensive skills? A subjective question to be sure, and one in which more than one prospective student of combative arts has become mired in... for the very ambiguity of bunkai interpretation sometimes works against proper understanding and application of kata.  Compared to three step sparring or self defense technique sets, which clearly show at its most basic forms useful defensive counters and responses, the bunkai techniques often can seem contrived and lacking in realistic application.  First time students can be impressed by a cool looking technique that drops an attacker in a couple of moves, and fail to grasp the subtlety of what kata and bunkai study can teach them...

All the methods in the videos above are means to learn basic positioning, footwork, distance, balance, timing and technique in a controlled environment; while some might seem more dynamic or more applicable to real world situations than others the goal remains the same. The one thing in my opinion that makes a case for bunkai study is that at deeper levels the technique itself is not as important as the principles it embodies.  Moving away from static repetition of choreographed technique to actual free flowing use of any appropriate response in unscripted fashion is possible when the principles in kata bunkai are truly understood. There is no longer "if A happens do B which equals C"... the three step sparring and self defense technique sets are great confidence builders but should be viewed as building blocks to "liberate" ourselves from the "classical mess" as Bruce Lee was fond of saying.  If you have a love for the arts in more than a passing way kata and bunkai  can certainly provide a lifetime of study with the added benefit of an ever growing chest of possibilities for technique and skill development to enhance your karate.

Some arts such as Krav Maga and Kali have no preset patterns of technique, but rather use flow drills and attributes training to instill combat capabilities both in empty hand and weapons use.  The goal is instinctive, unscripted response to any attack without pause or thought... their methods can provide a faster learning curve if street self defense is the main objective. Shorter path to the same mountaintop in my view...

Different scripts, no wrong ending
I have experienced all of the training methods discussed in this article, and with proper guidance any of them can be used to develop fighting skills needed in self defense.  The issue is that I don't see any of them being able to accomplish useful civilian defense training on its own; they are parts of an incomplete whole. Now, if your interest in martial arts is geared towards fitness, self improvement or as a means of physical meditation maybe repetitive kata practice or endless sambo matsogi with a partner will provide what you seek. However, to make martial arts have martial intent more than just moving around simulating karate movements is needed. A progression from basic skills development by sparring and kata practice to study of fighting applications in bunkai, coupled with flow drills and scenario training can go a long way to effectively prepare a person for civilian self defense.  Not all people will use all methods, usually concentrating in one type more in line with the training paradigm of their chosen system. If, however, karate is the path you've chosen then you owe it to yourself to delve deeper into bunkai analysis of your kata; your art will be richer and more effective for it.

"In primary freedom, one utilizes all ways and is bound by none, and likewise uses any techniques or means which serve one's end.  Efficiency is anything that scores."- Bruce Lee

"The techniques should not be practiced simply so they can be performed in the kata. Since karate is a fighting art each technique and movement has its own meaning.  The karateka must consider their meaning, how and why they are effective, and practice accordingly"- Shigeru Egami

Some of my favorite things

JoRoman
A place to share my random thoughts and ideas about the martial arts and related topics...